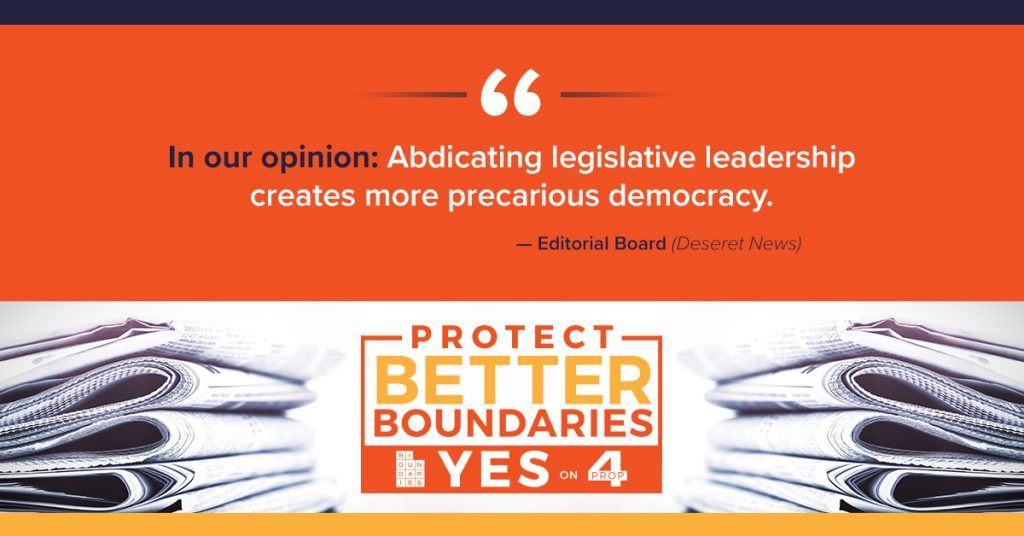 The Utah Legislature is preparing to possibly modify two citizen initiatives passed by voters last November. It would be a shame if lawmakers did so with the conviction they are doing the work of representing the people.

Utah is built on the foundation of a republic. Its political framework requires select individuals to represent a greater population while the state considers which laws will guide its people toward freedom and prosperity.

That work needs open debate, collaboration and consideration of what the electorate needs. It should not, however, consist of lawmakers punting on difficult issues. As voters know from the 2018 election season, abdicating legislative leadership invites a more direct approach to democracy.

That isn’t always a good thing.

Citizen initiatives are an insufficient way to govern. They ignore the debate, compromise and amendment process lawmakers undergo when grappling with a bill. Instead, initiatives present voters with an either-or choice that’s most likely been crafted by a special-interest group.

Even though the Utah Constitution invests in the Legislature the power to make and change laws, lawmakers shouldn’t confuse amending an initiative with properly executing their duties.

If the Legislature moves forward with its plans to amend the initiatives, critics may cry foul for tampering with the so-called “will of the people.” Such outrage is both understandable and misguided. The reality is the will of the people was ultimately exercised when voters elected their representatives, so the real frustration ought to be directed at the lawmakers who initially failed to lead out on tough issues.

On the docket for possible changes this upcoming session are Proposition 3, which would expand Medicaid to a greater number of Utahns, and Proposition 4, a so-called anti-gerrymandering measure, which would establish a bipartisan citizen panel to redraw the boundaries of electoral districts.

Each of the initiatives required verified signatures of more than 113,000 registered voters, and each had to meet certain signature thresholds within Senate districts in order to qualify for the ballot. Each had vocal supporters and opponents and each was the source of a spirited campaign during election season.

But some legislators want to significantly pare back Medicaid expansion, saying the voter-approved version is too expensive.

Proposition 4 is even less popular among legislators, some of whom are threatening to file a lawsuit against it. A member of the Republican majority called it nothing more than a “Democrat power grab.” It’s natural lawmakers would express their concern over such a change, which would add a layer of transparency to the redistricting process — a task assigned to the Legislature.

Neither of these propositions is perfect, which could validate the need for small tweaks from legislators over time. But the optimal fix is for lawmakers to recognize their role in Utah’s republic and anticipate their constituents’ needs before voters turn to last-ditch efforts.