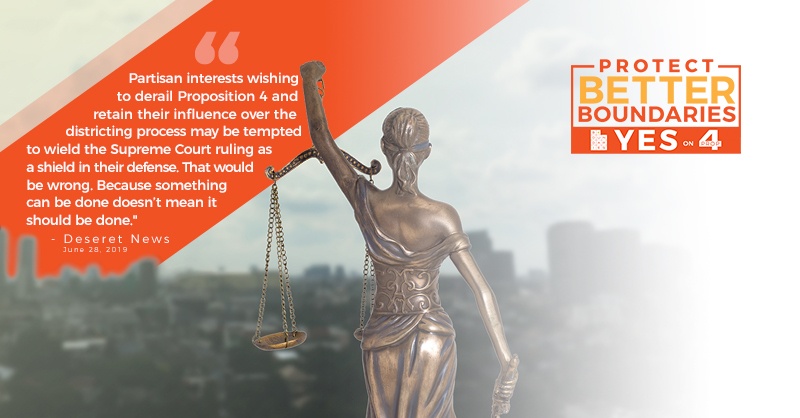 The Supreme Court ruling that partisan gerrymandering is not prohibited by the Constitution should not be construed as an endorsement of the practice, which the majority opinion concedes can lead to districting practices that “seem reasonably unjust.”

Permissible though it may be, the practice of gerrymandering remains destructive to the interests of fair electoral representation. Work in Utah to remove partisanship from the process of establishing voting districts should go forward with the consent and cooperation of state lawmakers.

Those who would defend allowing partisan influences in the boundary-setting process may see the court’s ruling as giving license for the practice. Yet, the language of the majority opinion is clear: “Our conclusion does not condone excessive partisan gerrymandering. Nor does our conclusion condemn complaints about districting to echo into a void.”

The decision holds that the federal judiciary is not explicitly empowered under the Constitution to reverse state districting decisions. We agree with the court that the remedy for excessive gerrymandering lies in the halls of state government. In Utah, such a remedy exists in the principles of Proposition 4, approved by voters in the last general election. The “Better Boundaries” initiative, imperfect though it may be, would establish an appointed commission to advise the Legislature on creation of voting precincts for congressional, legislative and state school board districts.

Partisan interests wishing to derail Proposition 4 and retain their influence over the districting process may be tempted to wield the Supreme Court ruling as a shield in their defense. That would be wrong. Because something can be done doesn’t mean it should be done.

We have long encouraged the process of boundary-drawing to be an objective exercise, resulting in the creation of districts that recognize the geographical integrity of communities and common citizen interests. In that regard, Utah’s current electoral map fails. The 30,000 residents of Holladay, for example, are divided into four state legislative districts, two state senate districts and two congressional districts. While the Supreme Court ruling notes the difficulty of objectively identifying excessive gerrymandering from a judicial point of view, from the perspective of common sense, it appears clear as day.

We agree with Justice Elena Kagan, author of the dissenting opinion, that gerrymandering as practiced in the cases brought before the court “imperil our system of government.” Of the foundations of the republic, she wrote, “None is more important than free and fair elections.”

The next drawing of electoral districts will commence after the 2020 census. In Utah, with a dominant Republican majority at the helm of state government, there will be intrinsic pressures to continue to pursue districting in a way that favors the majority’s retention of power. Scheming to contour boundaries for political advantage may now be sheltered from direct review by the judiciary, but it remains subject to review by voters.

In Utah, voters have made clear their desire for the boundary-setting process to reflect principles of fair and equal representation. Extreme partisan gerrymandering runs counter to those principles and should be held as indefensible, regardless of by whom it is practiced.