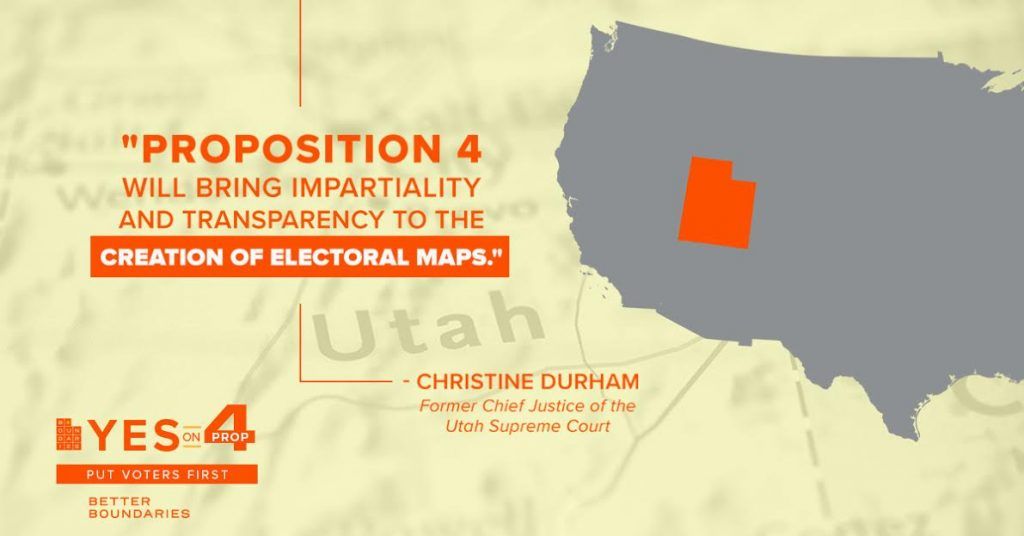 Proposition 4 is a citizen ballot initiative designed to strengthen our representative democracy by curtailing the practice of gerrymandering. Proposition 4 will bring impartiality and transparency to the creation of electoral maps.

For too long, politicians in this country and in Utah have been allowed to draw their own legislative districts, essentially choosing their own constituents and insulating themselves from election challenges. Known as gerrymandering, this practice allows incumbents to choose their voters instead of allowing voters to choose their representatives. This system promotes a lack of accountability. It allows office-holders to ignore the views of constituents in districts where they are sure of winning whatever their policy and political choices. Proposition 4 will give voters the right to have their voices heard by placing reasonable limits on politicians’ power to tailor election maps by gerrymandering.

Proposition 4 addresses the problem of gerrymandering in two ways. First, it creates an independent seven-member redistricting commission, appointed by the governor and legislative leadership. The commissioners will be persons who do not have any personal interest in the outcome of election maps. For example, a commissioner may not be an elected official, a lobbyist, a political party leader or someone who otherwise holds a position that would present a conflict of interest. This citizen commission will recommend election maps to the Legislature, which can then enact or reject the recommendation. If the Legislature rejects the recommendation it must publicly explain why.

Proposition 4 also imposes reasonable standards that the commission must follow when drawing electoral maps, and the Legislature when reviewing its recommendations. These standards are common-sense rules, such as preserving communities of interest and not drawing legislative boundaries to benefit any candidate or political party.

Some have suggested that parts of Proposition 4 may raise concerns under the Utah Constitution. I disagree. Of course, no one can predict with certainty how a court will rule on a legal issue. But my reading of the relevant constitutional language convinces me that Proposition 4 is constitutional. First, the Constitution provides that “all political power is inherent in the people.” The Utah Supreme Court has described the people’s power to legislate by initiative as “coequal, coextensive” and of “equal dignity” with that of the Legislature. A vote for Proposition 4 is an exercise of that power.

Second, anyone challenging the constitutionality of a duly-enacted law faces an uphill battle in light of the presumption of constitutionality afforded all legislation. Finally, there is nothing in the text of the Utah Constitution or any judicial decision that suggests that the people may not enact procedures to ensure that electoral maps are drawn in a fair and transparent way.

Proposition 4 will create a process for drawing legislative and congressional districts in Utah that serves voters, not legislators. I urge all Utahns to vote Yes on Proposition 4.