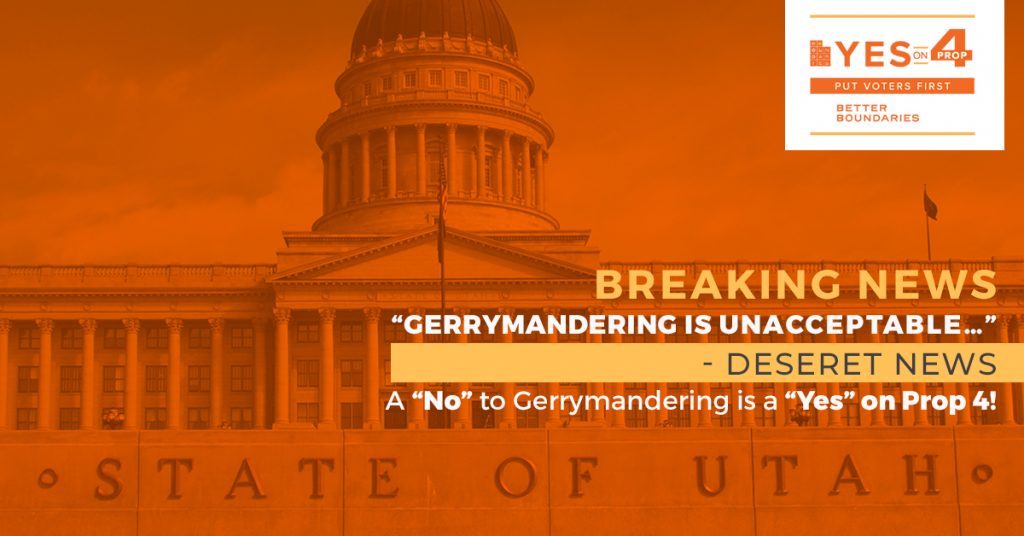 Utah’s electoral boundaries have been the subject of Wall Street Journal coverage and a federal court case, revealing the extent to which the Legislature has sliced the state into uneven districting. Unnaturally carving up communities is harmful to democratic processes and is too often an abuse of political power, which is why Proposition 4 is a step in the right direction.

Evidence of gerrymandering across the state is evident. Salt Lake County, the state’s democratic stronghold, has been split into three separate districts; Holladay’s population of 30,000 has been divided into four state House districts, two state Senate districts and two congressional districts; and a federal judge determined last year that San Juan County was racially gerrymandered to limit the representation of the county’s Navajo population.

Irrespective of partisan affiliation, gerrymandering is unacceptable because it compromises the integrity of American freedom of association — the idea that groups can use democratic collective action to advance common interests. Instead, cleverly drawn districts tend to silence the voices of communities that are sliced into smaller and smaller minorities, subjugating their perspectives to that of an unrepresentative majority demographic that often makes little geographic sense. As we have said before, this is an assault on the basic principle of democratic fairness and it should be limited to ensure a healthy democracy.

Proposition 4, or the “Better Boundaries” initiative, will begin to rectify this problem by giving the first pass at commonsense map-drawing responsibilities to an independent commission. Proposition 4 would establish a seven-member, appointed commission to advise the Legislature on congressional, legislative and state school board districts that should be adjusted to reflect population shifts after every census. This is particularly timely and necessary in light of the upcoming 2020 census.

Contrary to some arguments, this is not an initiative pushed by Democrats to increase their party’s representation; instead, this is a nonpartisan issue that can increase the equitable representation of all Utah residents across socioeconomic strata, racial identities and partisan affiliations.

Some evidence from researchers at Yale and UCLA suggests independent redistricting may not make districts any more competitive than the districts drawn by state legislatures. Proposition 4, however, supports the Utah Constitution by giving the Legislature the final say on any new maps. Time will tell if competition increases in Utah, but the primary goal should be keeping partisan leaders in check and grouping communities together in a more natural way.

26 comments on this story
Of course, keeping every Utah community intact is unrealistic. Districts must have a certain number of residents, and any congressional district would necessarily pull from and break up the Wasatch Front. Proposition 4 won’t fix that, but it would likely give more consideration to natural boundaries and find cleaner breaks.

It’s impossible to eliminate bias from any human action, redistricting included, and Proposition 4 isn’t a perfect fix. But it is a step in the right direction in an effort to maintain legislative accountability and encourage more vibrant political participation.