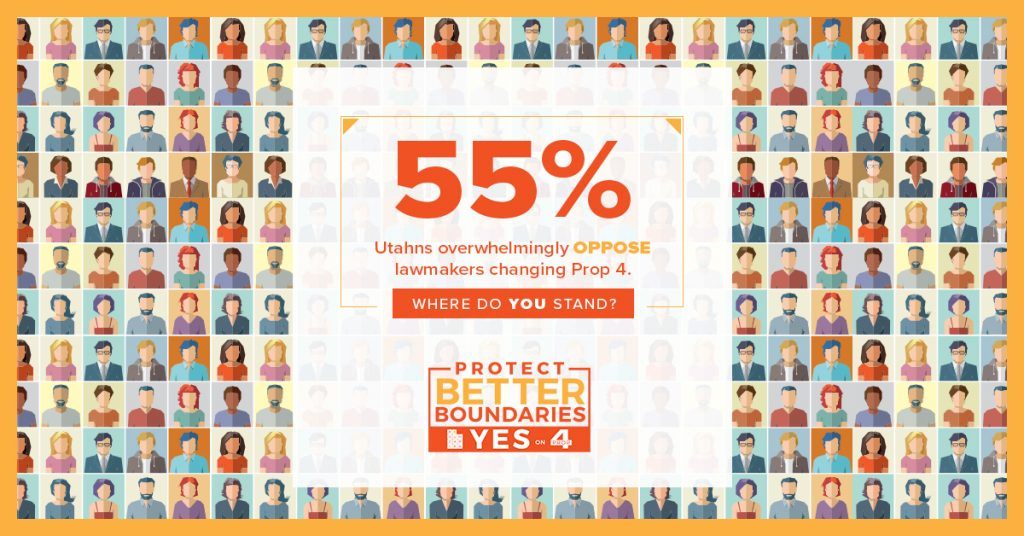 If the Utah Legislature, controlled by Republicans, and GOP. Gov. Gary Herbert repeal or change Prop 4 – the independent redistricting commission approved by voters in November – they will be going against, by far, what a majority of Utahns want, a new poll by UtahPolicy.com shows.

But since that time Utahns seem to have grown to like it more. The new survey by Dan Jones & Associates finds that 55 percent say the Legislature SHOULD NOT repeal or change Prop 4.

Only 34 percent, or one-third, believe lawmakers and Herbert should mess with it while 10 percent don’t know.

The majority Republicans in the Legislature may be influenced by how their own party members feel about Prop 4 – since it, in effect, stops gerrymandering in favor of GOP candidates and incumbents in U.S. House and legislative districts.

But GOP lawmakers would be wrong about that:

40 percent of Republicans give their party legislators the green light to mess with the new law.

Of course, Democrats and political independents want to do away with the Republican gerrymandering – where party loyalist legislators every 10 years draw lines to benefit their own party incumbents – even themselves.

Independents tell the Legislature to keep their political hands off of Prop 4, 65-28 percent.

And you see that Republican lawmakers hold a few percentage points more of the legislative seats than their vote totals statewide would indicate they should.

But if you look at the same numbers for Utah’s four U.S. House seats, you see how gerrymandering really harms Democratic candidates there.

But even those who told DJA that they are “very” or “somewhat” conservative in their politics still don’t want the Republican Legislature to mess with Prop 4:

And here are some interesting numbers.

Older Utahns, who have lived through at least two legislative redistricting cycles by a Republican-controlled Legislatures, feel the most strongly about stopping gerrymandering:

And those over 65 years old or older say don’t change or repeal the independent redistricting commission law, 57-37 percent.

Still, chances are Herbert and Republican lawmakers will do something to Prop 4, for already they are talking about how it violates the Utah Constitution – although the U.S. Supreme Court has upheld other states independent redistricting commissions.