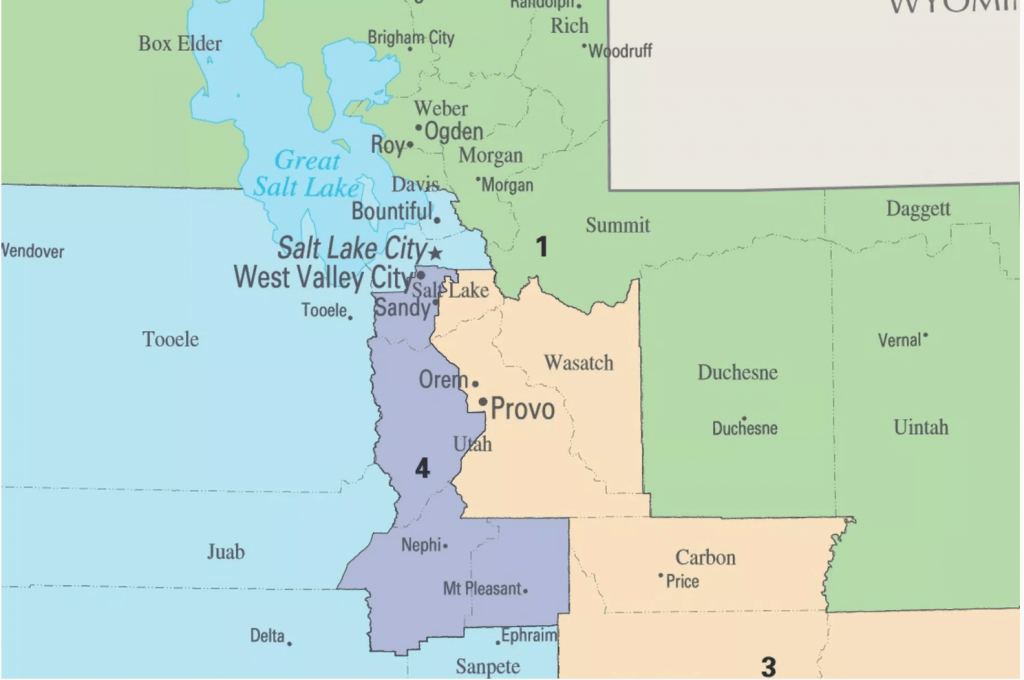 SALT LAKE CITY — Have you run out of table space for your pandemic-therapy jigsaw puzzles? Are Rubik’s Cubes just too easy? Already a whiz on every aspect of the $2 trillion congressional stimulus package? Do you find the theory of relativity boringly simplistic?

Are you secretly glad for social distancing because you no longer have to wonder why people avoid you at parties?

Then maybe redrawing Utah’s congressional districts is just what you need to while away the hours in isolation.

Christopher Collard, a research analyst at the Utah Foundation, has created an online tool that lets you draw Utah’s four districts any way you please, keeping in mind that you ought to stay within the rules of a recently written Utah law and a rather strict set of federal guidelines. (Find it at utahfoundation.org.)

For instance, each district ought to contain 835,631 people, give or take 1%. You probably want to keep communities of interest together, if you can decide which interests ought to count.

And you need to do it all in a fair way, whatever that means.

Think of it as a way of getting pumped up about the census, which started counting all of us this month and will result in the need to redraw districts. Think of it as a way to temper your anger when you go to the polls in a couple of years and find out you’re no longer able to vote for your favorite candidate because your house is no longer in his or her district.

Or just think of it as a way to toy with the boundaries of insanity and stress-induced insomnia.

This, as Collard told me Tuesday, is harder than it looks.

“You really end up with two options,” he said. “You can create two compact districts in Salt Lake and Utah counties and divide the other two districts into mostly rural areas, or you can carve up the Wasatch Front and apportion parts of it to each district.”

Collard knows what he’s talking about. He’s spent a lot of time with his creation and has, he said, “probably five different favorites.”

But he has found that his little tool forces people to come to grips with some philosophical questions. Would the people of rural San Juan County, for instance, feel satisfied being represented by someone whose district includes urban Salt Lake County?

“I wonder if people in rural areas feel left out because they don’t need their representative to listen to them in order to be elected,” he said.

These are the questions that ought to occupy the minds of public servants every 10 years. But, of course, other questions — some may call them crass, political questions — lurk, as well. Some of you may wonder how to draw a district that would favor at least one Democratic representative. Some may look for ways to turn District 4’s current Democratic representative into a private citizen.

Collard stays clear of those questions. The Utah Foundation is strictly nonpartisan. However, the online summary of the process does note that efforts to avoid gerrymandering are complicated by the fact that like-minded people tend to choose to live in similar places. Thus, 70% to 80% of the people near Salt Lake City’s Liberty Park are Democrats, and roughly the same percentage in Riverton are Republicans.

These types of hands-on simulations are more than just entertaining pastimes. They are morally instructive to a society that values self-government but that too often has little understanding of the nuances and underlying issues involved.

Collard’s simulation reminded me of the fall of 1998, when then-Gov. Mike Leavitt invited the state’s editorial boards to the Capitol, where he had arranged for us to sit at computers and play a state budget computer game.

We were given each state agency’s requested budget and the total amount of expected state revenues. We could fund, reject or alter these requests at will, or we could raise taxes, change the amount teachers were paid or even declare that the experts were wrong and that we expected higher revenues.

But no matter what we did, a fictional newspaper called “The Standard Deseret Tribune” would rip us to pieces.

Collard’s simulation isn’t as mean, but after working at it for a while, I got a message telling me, “You are almost there! But the Supreme Court would tell you to keep working.”

Of course it would.

This will be the first year an independent redistricting commission convenes to suggest boundaries to the Utah Legislature, not just for Congress, but for every legislative district. As always, the task won’t be easy. The art of governing makes campaign slogans sound like playground babble.

But at least this time you can play along.