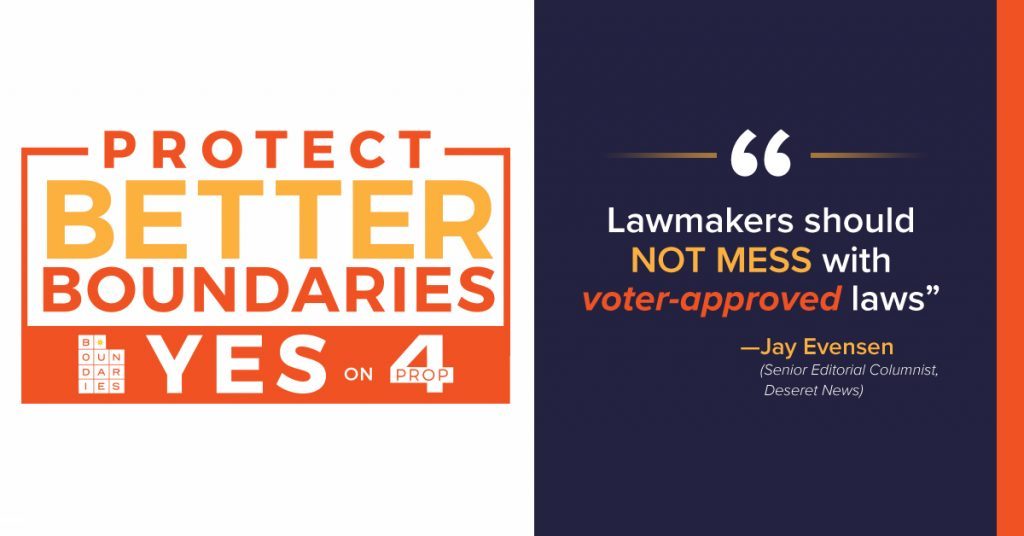 Only four months have passed since I posed the question, in this column, of whether lawmakers would have the guts to change an initiative passed by voters. That seems like such an innocent time, now.

Back then, the question centered on Proposition 2, the initiative to legalize medical marijuana. I supported efforts to change it, which the Legislature did in a December special session only weeks after voters passed it.

Now, the question is whether lawmakers also should change propositions 3 and 4, which, respectively, expand Medicaid coverage, under Obamacare, to about 150,000 low-income people, and set up a commission to recommend how to draw political boundaries to avoid gerrymandering. Both also passed.

With the 2019 legislative session set to start in a matter of days, talk is swirling. A bill to change Medicaid expansion is being written. Some want to sue to challenge the boundary commission.

Doing either would be a terrible idea.

You ask, “Evensen, how could you support rewriting Proposition 2 and oppose rewriting the other ones? Isn’t that, uh, inconsistent?” (I’m imagining you are too polite to use other words.)

The answer is, no.

Several weeks before Election Day, the main parties for and against Proposition 2 met and hammered out a compromise that rewrote the initiative to allow for medical marijuana while still satisfying the demands of those who worried it would lead to a de-facto legalization of recreational marijuana.

It was too late to change the ballots, so voters had no choice but to vote on the original proposition, which they approved. But when lawmakers met to change what voters had done, they were acting with the support of major players on both sides.

That’s not the case with either Proposition 3 or 4.

Before going further, I need to restate my general skepticism about citizen initiatives.

As I wrote back in September, normal lawmaking is done by folks who are elected to take the time to study issues and represent the needs and wishes of their constituents. They hold hearings, make compromises and propose amendments. This process tends to chip off the sharp edges of any new law, taking multiple viewpoints into account.

Only 21 states allow initiatives for the purpose of writing laws. They require only the proper number of signatures and a majority vote to become law. People get to say yes or no. They can’t vote, “Maybe, but only if we change this or that.” Frankly, many voters don’t understand the nuances involved.

And yet there are times when the public’s representatives consistently ignore the people’s desires. That seems to be the case with both Medicaid expansion and the drawing of political boundaries.

If Utah is going to allow citizen initiatives (lawmakers, generally, have hated them since voters put them in the state constitution shortly after the turn of the 20th century), then these ought to mean something.

On Medicaid expansion, some lawmakers say the 0.15 percent sales tax increase it provides for is not enough to fund the cost. Legislative leadership seems to support a plan that would cover people who earn less than the federal poverty level, rather than those who earn up to 138 percent of it, as called for in the proposition.

I understand their desires to be good stewards of public funds, but they’re missing the point. Voters wanted the full expansion and indicated a willingness to pay more taxes to get it. The proper thing would be for lawmakers to increase the sales tax to match the costs.

The proposition, after all, still gives state lawmakers the last word. They just have to provide a reason as to why they would change a recommendation from the boundary commission.

While lawmakers may not confront this until after the 2020 Census, they won’t be able to change what voters passed without effectively arguing both in favor of gerrymandering and against transparency — not the stuff of effective campaign slogans.

Utah is one of only a handful of states that impose no limits on how the Legislature may alter a voter-approved law. That kind of nimbleness is an important safeguard against the potential mischief of direct democracy, but it should be used with extreme caution.

The initiative process is filled with flaws and pitfalls, but as long as it remains in the state constitution, it deserves respect. Mess with that too eagerly and you mess with public trust, which would be fraught with consequences of its own.