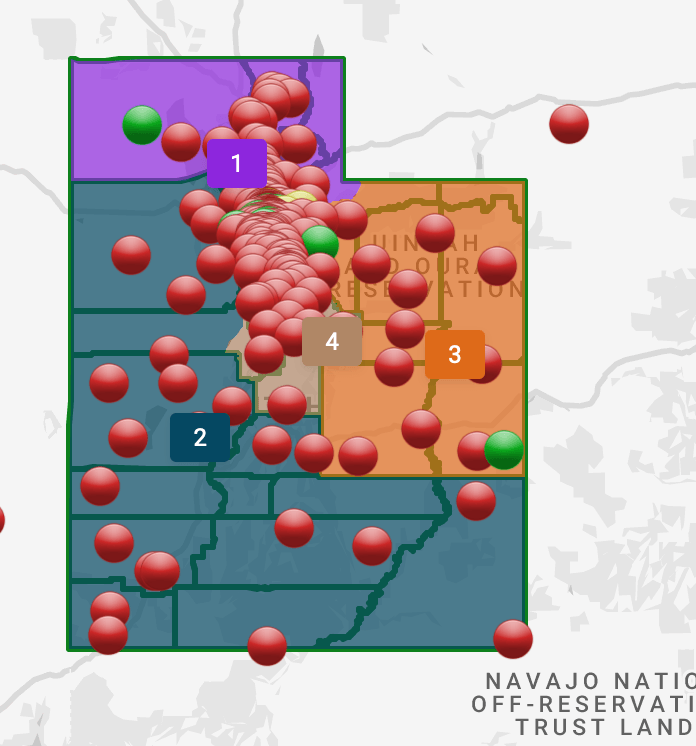 An analysis by the MGGG Redistricting Lab’s Moon Duchin and BYU Professor of Mathematics Tyler Jarvis demonstrates that the Legislative Committee’s congressional and house maps are heavily gerrymandered to favor Republicans. Using an ensemble method, where thousands of maps are computer generated to develop a type of bell curve, the Congressional and House maps prove to be political outliers and do not reflect Utah’s political landscapes when charted against ten recent elections.

In contrast to legislators, the Independent Redistricting Commission did not use partisan or incumbent data when drawing their maps. The Independent Commission maps passed robust measurement to determine political neutrality.

Unlike the Independent Commission’s live streamed and recorded map drawing sessions, legislators drew their maps behind closed doors and have allowed less than three days (over a weekend) for public comment.

Additionally, the Legislative Redistricting Committee’s maps – with the exception of their house map – split counties and cities unnecessarily and at a rate much higher than the Independent Redistricting Commission’s maps. Utahns were unified in their feedback that they would like cities, counties, and communities left intact whenever possible. The Independent Commission maps achieve this goal at a standard above the Legislative Committee maps.

Better Boundaries supports the adoption of the Independent Redistricting Commission’s maps due to their transparent and apolitical process and their maps that assure fair representation and communities kept whole.

To learn more about our mapping analysis, view this document.