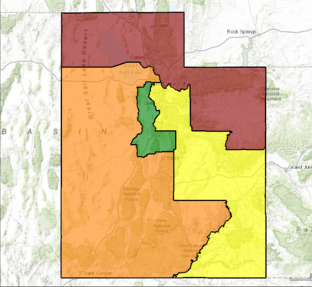 Monday was the deadline for announcing the seven members of Utah’s independent redistricting commission. Utah Governor Spencer Cox started with the appointment of Rex Facer as chairman of the commission.

In 2018, Utah voters passed Proposition 4 – which created a seven member commission to recommend redistricting plans to the state Legislature that will redivide the state into congressional, legislative, and state school board districts. It was a close vote – with less than 7,000 voters deciding in favor of the initiative. The initiative was later altered by the state legislature though, reducing it to an advisory role.

Three members of the commission will be chosen by the Democratic leaders and three by Republicans. The chair, who was selected by the Governor, serves as the 7th member. As Minority Leader of the House, Summit County State Rep. Brian King was instrumental in the choices for the Democrats and he’s excited by their choices. He worked with Senate Minority Leader Karen Mayne to come up with their choices. They each chose one candidate and then the third was a joint appointment.

“My appointment is Pat Jones former State Senator,” Rep. King said. “Senator Mayne’s appointment is former Justice, Christine Durham, and our joint appointment is, former Court of Appeals State Court of Appeals Judge Williams Thorne. They’re all extraordinarily well qualified I worked closely with Senator Mahan on this and I’ve had some communication with each one of the three – extensive communication with each one of the three in the past couple of weeks. I’m really, really excited about this. We just think that they’re great picks that they will serve Utah well, that they will bring a lot of credibility to this Independent Redistricting Commission and that was our hope our hope as Democrats is to make it as difficult as possible for the Legislature and the Legislative Redistricting Committee to ignore the recommendations from this Independent Redistricting Commission.”

The Republicans chose former First District Congressman Rob Bishop who retired after nine terms in January, former state Senator Lyle Hillard, who was ousted from his seat in June’s primary and the joint, non-partisan position went to Jeffery Baker of Davis County.

The commission is required to hold at least seven public meetings across the state by August 1st and is required to adopt their final map proposal no later than August 21st. That could be difficult. The Census Bureau said last week it would be late in delivering the data that states will need to redraw the political boundaries.

Rep. King says that compressed schedule will be difficult to manage, but not impossible. He says the goal is to get the boundaries redrawn before the 2022 election, even though other states are already saying they won’t have their new districts settled until the 2024 election.

“There were a couple of states that I heard said to the U.S. Census Bureau, look unless we have this information by the end of February, we’re not going to make any commitment to have the redistricting process finished within our state to allow for it to be in place for the 2022 election,” King said. “It’s already in Utah, a very short, narrow window. In the past we’ve done our redistricting and had it finished by, oh you know, September, October, November of this year, in past years you know, the year before the election year. So, this is, I mean you know if you, if you delay by 60 days for example the information coming from the U.S. Census Bureau, you may very well put it, make it very, very difficult to do a good, solid redistricting process. I’m not saying that Utah won’t do it – I’m saying that the more this you have a delay of that information coming to state from the Census Bureau, the more difficult it becomes to do it in a way that invites, and receives the public input, and you know it’s a real thorough process in a way that we’d all like.”

Constitutionally, the Legislature must approve the new map lines by the end of the 2022 general session – but that will likely have to be done earlier since candidates begin filing for office that year on March 17th.

The governor’s choice for chairman is Rex Facer, an associate professor of public management in the Romney Institute of Public Service and Ethics at Brigham Young University’s Marriott School. He has taught in the Master of Public Administration program since 2009.

In a statement from Governor Cox, he said that Facer will bring, “the public policy expertise, leadership experience and unbiased opinion that we’re looking for in this independent redistricting commission.”