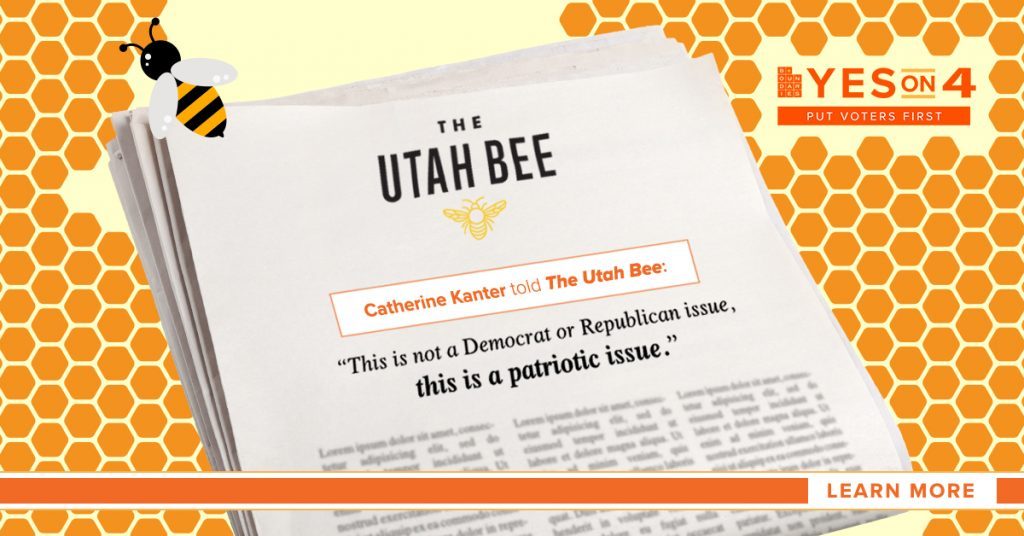 As the General Election nears, Utahns are not only deciding who to vote for, but what. One of the ballot measures that we’ll be hearing a lot about is Better Boundaries, or Propostion4. Prop4 is a citizen ballot initiative that would create an “independent redistricting commission.” Its creators believe that gerrymandering, or the practice of allowing elected politicians to manipulate or draw their districts to favor their party, is wrong.

Prominent political leader, Catherine Kanter is one of the voices behind Prop4, and she spoke with The Utah Bee about why she’s so passionate about this idea. “Prop 4 was formed by a bipartisan group of people, who came together because we had something in common,” said Kanter, “we realized that gerrymandering was a problem that needed to be fixed in Utah.”

The new law would include two parts; it would create a new set of rules to guide redistricting, as well as a new, independently formed commission in charge of redrawing the Utah legislative maps.

According to the Better Boundaries website, “The Act addresses the problem of gerrymandering in two ways. First, it creates a seven-member Independent Redistricting Commission. Second, the Initiative creates a list of common-sense rules in order to thwart gerrymandering. Most importantly, Proposition 4 forbids drawing districts to unduly favor or disfavor any incumbent, candidate, or political party. And it allows Utah voters to challenge a map enacted by the Legislature that violates these standards.”

While the idea of the law seems pretty straightforward, critics believe that this could simply be a ploy to get more democrats elected in Utah. They say that if Utahans really wanted different representation they would elect more officials from both parties. They are concerned that the goal is not truly bipartisan, but instead to skew the boundaries to help democrats.

Kanter said that there is no partisan goal behind the proposed law. “Prop 4 is an attempt to restore accountability to all of our elected officials. We are not focused on a particular political outcome…this is an attempt to fix a broken process. The law is intended to get rid of gerrymandering in Utah.”

“Ronald Regan was a redistricting reformist, and he called gerrymandering ‘a national disgrace.’ This is not a Democrat or Republican issue, this is a patriotic issue. If people are against gerrymandering, they should vote Yes on Prop 4.”

At the end of the day, it’s up to Utahans to decide who they want representing them, which is why it is so important to vote in midterm elections. To learn more about Prop4 and to decide how you’ll vote, visit BetterBoundaries.org.

This article was originally featured in The Utah Bee READ HERE