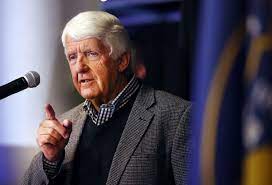 SALT LKE CITY – Better Boundaries Executive Director released the following statement:­ ­“Last night, Utah’s first-ever Independent Redistricting Commission unanimously approved twelve maps (three each for State House, State Senate, State School Board, and Congress) for recommendation to the Legislative Redistricting Committee. We applaud their efforts and remind Utahns this commission was established in order to avoid the inherent conflict of politicians picking their voters. Unfortunately, Rob Bishop resigned from the commission prior to final approval when the commission declined to forward his favored map, which did not adhere to criteria required in the statute. We applaud the Independent Redistricting Commission’s continued execution of state law and adherence to statute criteria. Ultimately, the Independent Commission approved congressional maps that reflect multiple options that meet the criteria.­ ­The Independent Commissioners were appointed by state lawmakers and the governor in a process enacted into law in March 2020, with unanimous approval in the Utah Senate and only four dissenting votes in the Utah House. Despite some rhetoric to the contrary, the Independent Commission has representatives from rural and urban Utah, reflecting proportionally the population of Utah. We applaud the bipartisan effort of the six commissioners, appointed by three republicans and three democrats, to adhere to the standards and criteria of the statute and congratulate them on their unanimous approval of twelve maps that prioritize representing all Utahns. Their work benefited all Utahns and deserve our respect.”­