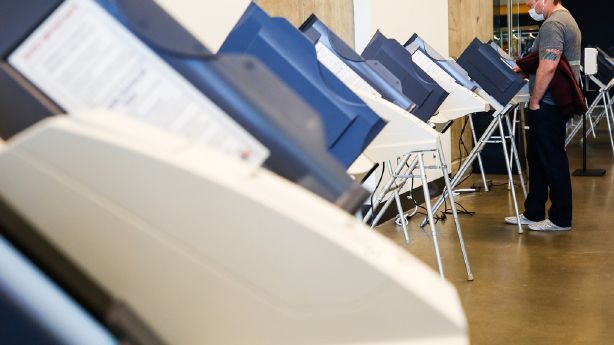 SALT LAKE CITY — Over two years after Utah voters narrowly passed a proposition to create an independent commission for the purpose of creating redistricting lines in the state, the members of that committee were finally revealed this week.

The seven-person committee will be chaired by Rex Facer, an associate professor of public management in the Romney Institute of Public Service and Ethics at BYU. Facer was appointed by Gov. Spencer Cox Monday.

“Rex Facer will bring the public policy expertise, leadership experience and unbiased opinion that we’re looking for in this independent redistricting commission,” Cox said in a statement after announcing his selection. “We’re grateful to Dr. Facer for his service and look forward to his leadership in this new process.”

The remaining members were selected to represent Republican, Democratic and unaffiliated interests. Former Rep. Rob Bishop and former Utah Sen. Lyle Hillyard, who both left office after their terms expired at the start of 2021, are perhaps the most familiar names picked to serve on the committee.

The rules regarding the committee were passed through Proposition 4, which passed in 2018 and then adjusted during the 2020 legislative session. Under the rules, the governor selects the commission’s chair, while representatives of the majority and minority political groups were allowed to select four total partisan members and two nonpartisan members.

The bipartisan group Better Boundaries pushed heavily for the initiative, which aimed to curb practices of gerrymandering when creating Utah elections maps. The group also played a factor in coming to the final rules for the commission in 2020. This week’s announcement was viewed as a milestone in its effort.

Noah Rosenberg, executive director for Better Boundaries, said the group is “very optimistic” about the individuals selected to the first commission since the push was made.

“We’re excited to work with them and alongside them to make Utah’s 2021 redistricting process a success for all Utahns,” he said, adding that he believed all in charge of making the selections for the group “very, very seriously.”

“They appointed serious folks to fill these seats. … Really, I think every one of these people brings a sense of gravitas to their role,” he continued. “I am very confident that each of them will take their responsibility on the commission very seriously and will work very hard, as many of them have a proven track record of doing for the people of Utah.”

KSL.com spoke with Rosenberg Wednesday, not just for the group’s reaction to the commission members but for insight into the challenges and timelines the commission will have as they redraw

The hurdle the commission faces: The 2020 Census delay

Rosenberg pointed out that the commission has a deadline to submit the new boundaries by the end of the 2022 legislative session. It might be a year away but the committee needs 2020 Census data to know what to map, and that information is already weeks behind and all of the information isn’t expected to arrive anytime soon.

The census isn’t just a headcount of all the persons living in Utah or the U.S., it factors into federal money allocations and representative apportionment. That means every decade, congress reviews census data and assigns states the number of representatives every state gets. Since Utah’s growth from 2000 to 2010 outpaced many other states, Utah received an extra congressional seat that is currently held by Rep. Burgess Owens.

That’s why time might be the biggest enemy of the new commission. COVID-19, legal battles over the census and a change in presidential administration have all factored into the massive delay in one way or another.

Apportionment numbers are typically released to states by the end of the year the census was conducted, which didn’t happen. It’s unclear when that information will arrive but Kathleen Styles, chief of decennial communications and stakeholder relations for the Census Bureau, said that data is expected to arrive by April 30, the National Conference of State Legislatures reported last week.

More importantly, she said other data that is important for state redistricting isn’t expected to arrive by April 1, which is the required deadline. Instead, Styles said it wasn’t expected until likely after July 31 — signaling a possible fourth-month delay in the redistricting process at best.

It’s still unknown if Utah’s growth from 2010 to 2020 will lead to any congressional changes. The Census Bureau did release a 2020 population estimate in December, which noted that Utah’s population growth is believed to have exceeded the country at least in terms of percentage growth. It estimated Utah’s population was 3.25 million in 2020, which would be an increase of a little more than 485,000 people in 10 years.

Experts don’t believe Utah will gain or lose congressional seats for at least the next 10 years, however. Brookings Institution demographer and senior fellow William Frey used the estimates to project Texas will gain three new seats and Florida will get two, according to CNN. Arizona, Colorado, Montana, North Carolina and Oregon would gain one apiece if his projection is right. Alabama, California, Illinois, Michigan, Minnesota, New York, Ohio, Pennsylvania, Rhode Island and West Virginia would all lose one seat.

But redistricting isn’t just about congressional seats. It covers state legislative and school board seats, too.

The commission might need the census data to fulfill a new requirement to try and preserve communities of interest. That essentially equates to keeping ethnic, racial and economic groups together. Examples of this would include school districts or even Hill Air Force Base communities.

“What that means is in order to preserve communities of interest and make sure they are drawn into the district in whole and not cut up in parts, the redistricting commission is going to want to collect a lot of community of interest data from the public,” Rosenberg explained.

It is possible, however, that the commission could work to gather that type of data before it receives official census information in order to get a head start and balance out any delays caused by the Census Bureau.

A race against the clock

Again, the 2022 legislative session seems like plenty of time to complete a new redistricting map especially ahead of the midterm election in November 2022; however, election processes begin well before any general election. If the process is completed at the deadline, Rosenberg explained that it could still lead to 2022 election disruptions.

Individuals typically announce their intent to run for office around March ahead of an election. Gathering signatures to qualify to be on the ballot begins weeks before that.

Since legislative and state school board elections have requirements that an individual must live within the district they are running in, the map needs to be completed before candidates know if they even qualify to run. Candidates also need to know if they are gathering valid signatures from residents within that district, which can’t be known without a district map.

“All of that really needs to be settled by the time that Jan. 1 signature-gathering period opens,” Rosenberg said. “Really, the districting has to be finished by the end of December of this year.”

So what would happen if the commission misses its deadline? It’s something Rosenberg said could happen “in theory,” but the state would need to pass legislation this year to approve it since the deadline is set up by the state constitution. Voters would then have to pass that change even if it was for just one redistricting deadline.

Especially if the commission is able to get a head start on redistricting and then fill in blanks from the 2020 Census once it arrives, Rosenberg said he anticipated that the process should be able to be completed on time.

“I’m pretty confident that even with this shorter timeline with the census that the people of Utah, the independent commission, the Legislature, they’re legislative committee will all be able to work together to make this process run maybe faster than we’ve done it before,” he said. “But doing it in a shorter timeline doesn’t necessarily mean it’s bad or worse, or less thorough.”